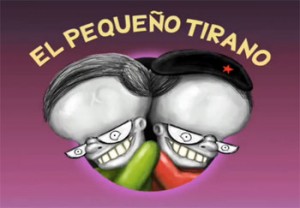 Yesterday was the first day of the Campus Party Convention and we’re very proud to say that the two conferences we assisted were imparted by colombian art teams.

The first conference was about the animation promoted in the web via blogs and similar tools. The crew was the one in charge of an animation with crictic content called: El Pequeño Tirano (The little Tyrant). The series main characters are “El Tirano Zurdo” (“The Left Handed Tyrant”) and “El Tirano Diestro” (“The Right Handed Tyrant”) two kids who represent two significant political movements but carried to their extreme (The extreme right or extreme capitalism and the extreme left or the extreme comunism) showing many of their worst aspects.

They talk about some important aspect in the conference: The ideal point between quality and content. We need to keep that in mind if we want to offer some quality product. If you spend so much time in the visual aspect, your work will have a slow rithm with big update intervals and your followers can lost interest cause that. They said, the most important thing is the content, yes, but if we, instead, concentrate the efforts too much in the content, we are forgotting that our work is about graphic content primarily. 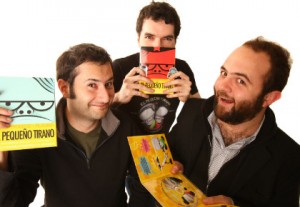 The second conference was given by the team creator of the feature film Pequeñas Voces (Little Voices). An award-winning film in several film festivals around the world. Yes, we were waiting for that since a while :). An animated film about the point of view of children victims of the violence in the country. Their website: Link

They talked about the process of making an animated film, in their case, with sorta low budget. The movie was showed in several countries already. It’s ironic we’re still waiting for it’s premiere here in Colombia XD. The tips they give us were, in short, that if we have a project of a nice idea in mind and we want to do it, we must do it with the equipment we have at hand, if possible. Many people is still waiting to have the resources of Marvel or Pixar. 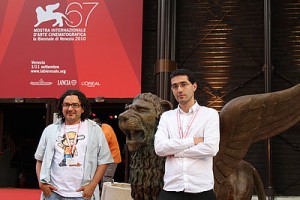 Some of the Little Voices crew

Both groups of lecturers remarked that you need to be concerned in your work and not be focused in the succes of others (and then, begin to ask why you aren’t that famous :P). It’s for the best 🙂

Finally, the most important thing: We’re artists, not journalists, nor engineers.We are here to dream and get others to dream along with us. So, if you have an idea, it doesn’t need to be the sociopolitical marvel but a nice and interesting one. Just like that.